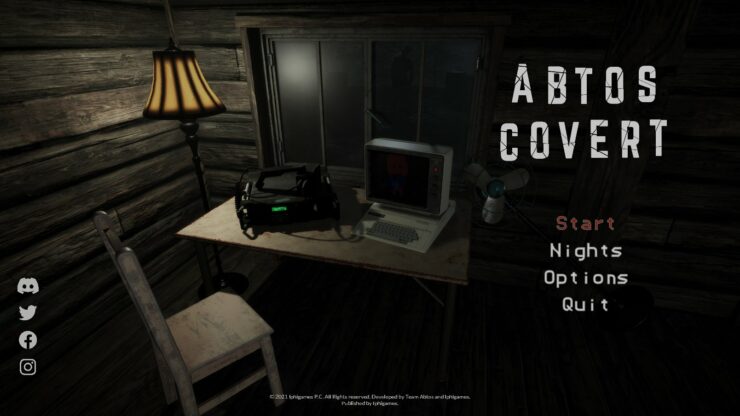 The scariest horror game I think I’ve ever played was the original Silent Hill. To be fair, I don’t play a ton of them, but the levels of absolute creepiness in that game weirded me out and actually caused me to lose sleep. After that, there’s been a few games that have startled me, but nothing that actually scared the shit out of me. Abtos Covert gave me a good startle (and you should watch the gameplay video to enjoy my scream), but definitely has a level of creepiness that could turn into a good horror game.

Being developed by Greek Iphi Games, Abtos Covert puts you in the first-person perspective of a lone soldier assigned to an outpost where some weird shit has happened, but no one takes seriously. The circumstances of the world around you is unclear. There’s no info on what your outpost is for or what you’re defending. The intro narration (which is actually cleverly done via a fellow soldier on a radio) mentions “enemy soldiers” approaching the outpost, but it’s unclear if it’s war time. Nor is there any info on why you’re the only dude there when there’s bunks for at least a squad, but I might be overthinking.

The only objective of the game is to “figure out what’s going on” but in the demo it seems pretty hard to do even that. You can manipulate some objects, and over the course of exploring the outpost I found some cassette tapes with short statements by the posts previous inhabitants, but nothing that really seemed to come together. It’s also unclear what you can do against the zombies that show up to murder you aside from hide in a locker (there’s a lot of lockers to hide in!) or die. In one instance, I shined a spotlight on a zombie and it ran away, but in another I did it and ended up a hashtag.

Overall, I think the game has a lot of potential. Maybe there needs to be a little more signposting on what to do related to the zombies, but it’s also possible that I just suck. Either way, check this demo out. Just don’t do it alone in the dark…