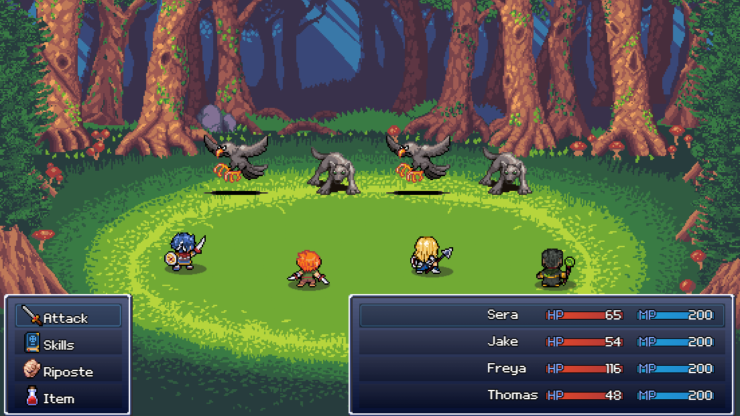 Role-playing games are all about stories. c. Here’s three games that are coming soon that you should keep your eye on:

The great RPG series in the history of video games is the Shining Force series. You’ll never convince me otherwise. I love the Fire Emblem series because it scratches that tactical RPG combat itch, but Shining Force I and II are nearly perfect. Bright Blades, by Sam Rowett Games, is very heavily influenced by the Shining Force games and looks like it could love up to what made those games great. You’ll take the role of Princess Freya as she fights to save her city from an evil rival kingdom. You’ll recruit allies, fight battles, and save the day. I dig it. There’s a demo available here, so check it out!

JRPGs are what most people think of when someone mentions a video game RPG- the turn based party-on-party combat, the experience points from battles, and the fairly simple classes. While Shining Force is my favorite overall RPG series, the Phantasy Star series would be my favorite JRPG series. Based on the screenshots and videos available, Mango Mischief gives me some string Phantasy Star vibes. However, the developer‘s description is quick to point out that this isn’t your run-of-the-mill JRPG, and instead parodies some of the more cliche themes that littered JRPGs in the 90’s. Mango Mischief is slated for a June 2022 release, so make sure to get it on your wishlist asap!

Maybe the reason why most people think of JRPGs when they think of video game RPGs is there’s so many JRPGs? It’s not a bad thing. They’re a great medium for telling cool stories, and often have a lot of replayability. Absinthia, from Team Bewitched, is going to give us another pixeltastic adventure with another protagonist named Freya. In this one our heroes are live in an island region within a peaceful community surround by dangers. When their home is threatened, four friends team up to protect it. Shenanigans, battles, and player growth is sure to ensue. The Steam page for Absinthia just went live, so go be one of the first to wishlist it and don’t forget to follow it’s lead developer on Twitter. And us too!

Oirbo – A beautiful game that made me cry