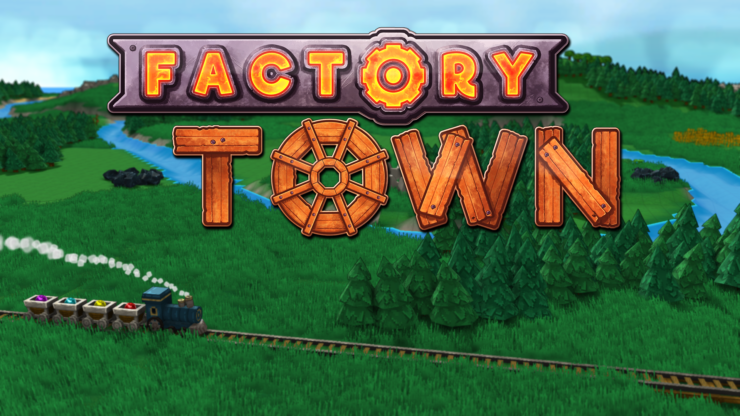 All things supply chain and logistics are in the news lately, and on people’s mind way more than usual due to shortages and bottles necks in logistical chains due to fallout from the pandemic. What we kinda took for granted two years ago we’re learning was actually a well-oiled, but somewhat fragile machine that got us all of our needs and wants around the world. However, none of this was a real shock to anyone who plays logistics games and watched their meticulously planned supply lines collapse with one tiny disruption. “Oh you managed to run out of logs and didn’t plan for that? Haha, enjoy watching everything slowly fail, sucker.” It’s like real life, but without any pain and suffering (except for your ego).

I’m a huge fan of logistics games, so I knew I’d probably really like Factory Town. Developed by solo dev Erik Asmussen, the game has been available in early release for a couple years, but was officially released as 1.0 this month. There’s already over 2k positive reviews on Steam, so I’m late the party on this one, as usual.

You start with a small town of people with a few basic industries established. Your goal is to expand both the town and the industries via building new houses and facilities and creating the supply chain to feed them. Your people look like the old Fisher Price Little People and just hop along to get stuff done. They can move materials and products around themselves, but it’s far more efficient to use wagons, convey belts, chutes, or trains to move things around the map. Like most logistical games, there’s more than one final destination for most items and different levels, from raw material to processed material to finished product, for all chains. Once thing I really enjoyed is the wide variety of products and different chains to build, especially involving similar raw materials. It adds a layer of management to figure out where to allocate the raw material used on multiple things.

You can play scenarios or in sandbox mode. So far, I’ve just done scenarios which are actually a lot of fun and don’t create annoyingly long goals. Also, once you’ve accomplished the goals of the scenario, you can continue playing in a sort of sandbox mode. Each map is pretty huge with tons of resources to use. I never figured out what happens if you exhaust all of a resource, but I suspect the amounts on the map make it pretty tough to do that.

Moving things around via people works pretty well at first, but you have to manually assign them to one pick up and deliver task. What gets a little frustrating is that if there’s a hiccup in the chain, that person will just sit there and wait. You learn pretty quick that it’s a very inefficient use of people, who can also work in production factories. Carts can be used to move items from one factory to another, or to a store or depot, but they also use one of your limited number of people slots. The key to Factory town is the use of chutes and conveyers! These can move materials automatically without the use of people or carts, and can even be given logistical rules to sort of move. I learned pretty quick that conveyer routes require a lot of planning ahead of time, and building all of your facilities in a tight area will screw you down the road. My favorite mode of moving products is via raft on a waterway. Always neat to watch the mini barge traffic!

My biggest gripe is the inability to create chained orders for people and carts to build more efficient supply chains. For example, it doesn’t appear possible to have a cart take paper from the lumber mill to the school, then pick up grain along the way and drop it off at the market, before returning to the lumber mill. It’s possible that I just didn’t figure out the how, but I saw no way to get it done. That’s a bummer, but also reinforces the importance of the conveyers and chutes for efficiency.

Overall, I love this game. It definitely scratches an itch for building satisfying supply lines and watching growth. If you enjoy the Patrician games or even Transport Fever, this one is for you. Thankfully, it doesn’t appear pandemics or government restrictions can destroy your supply lines in the game, so you’ll have that escape from our current reality. Or maybe we just need to build giant chutes for products to cross oceans!