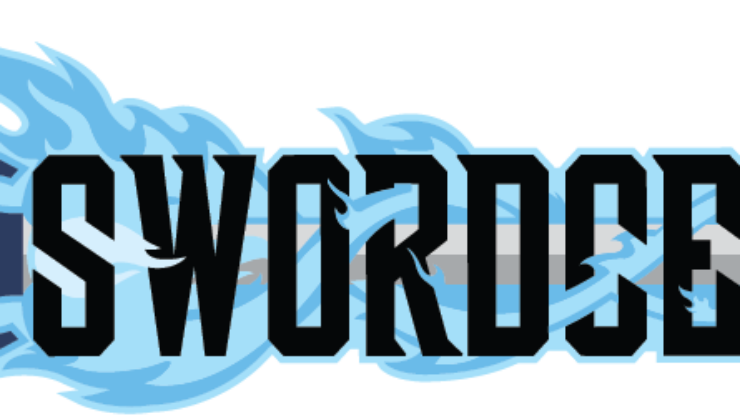 Lately, I’m on a roll with demos that absolutely kick my ass. Most recently, I played Oirbo, which destroyed me in ways I didn’t particularly enjoy. This time it’s Swordcery, but despite getting killed repeatedly by little green healing crystal demons, I actually really enjoy this game! Not sure if my appreciating the ass beatings is a new kink or not, but I’ll take it nonetheless.

Swordcery is from Temple Door Games, a partnership between two former devs on God of War. You play as Colt, a rando dude trying to save the Earth by collecting magic swords that have been raining from the sky. As someone who barely survived golf ball-sized hail once, the mere thought of raining sword is enough for me to not want to leave the house. The game is an action RPG, but the goal of the game is collecting all these quirky swords. For example, I stumbled upon a giant pizza slicer sword in my play through.

The game is made for play with a gamepad of some sort, but still works via keyboard. Your movement keys move Colt in whatever direction you want, but it’s the mouse pointer that determines what direction Colt is facing. This set up is somewhat tough to adapt to at first, and you’ll routinely notice Colt moonwalking across the screen as you move him one direction while he faces another. To go along with that, there’s a targeting system that I just couldn’t get the hang of, and I’m blaming most of that on how wonky some of the controls are via keyboard.

Despite there not being a told of variety in enemies in the demo level, the enemies that are there are tough! While trying to master the controls, I found myself getting made into a hashtag constantly by little shit demons. I’m not sure what it is, but those little bastards are harder than even some of the bigger and meaner looking enemies!

One thing I absolutely love is the procedurally generated worlds! Each play through comes with a new map, resulting in outstanding replay ability. To create some sort of broader challenge, the game tracks how many bad guys you kill so you can compete against yourself on each play through! I had a lot of fun with each room being different everytime.

Overall, I really liked Swordcery. There’s some rough edges to work out, but it’s an early access demo and that’s to be expected. You can check out the demo here on Steam! Also, the devs have a Kickstarter up to help fund making this bad boy here!

5 Under $5 During the Steam Autumn Sale