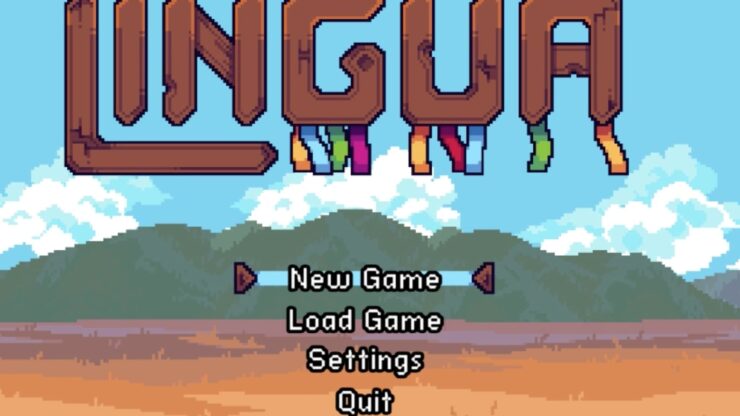 Once you grow up, one of the most hilarious things in movies in games is tiny children going into dangerous situations and coming out unscathed. I love the Goonies, but in reality Chunk probably should have become a hilarious corpse. Now imagine if that little boy didn’t talk, was armed with a slingshot, and was venturing alone through Brazil. Welcome to Língua.

Developed by Guilherme Giacomine, Língua tells the story of Beto, a boy living in rural Brazil. You start at your home with your mom and brother, but set off on your adventure by chasing after your runaway goat. One thing leads to another, that leads to an encounter with a magical being, then suddenly you’re a child running alone through caves and fighting off monsters. Pretty typical stuff. As the story develops, you learn more about Beto, his family, and why Beto doesn’t talk. It’s heartwarming stuff with plenty of hilarious bits mixed in.

The biggest aspect of the game is solving the many puzzles that allow Beto to continue his journey. Most of these puzzles come down to moving blocks or triggering enough sensors to open doors and such. What really shocked me early on is exactly how hard some of these puzzles really are! A lot of games that incorporate puzzle bits, generally seem to do so as an afterthought, however in Língua it’s clear a ton of thought and planning want into each puzzle. But despite being hard, the puzzles remain fun. They tend to toe that fine line of being hard, but not so hard that you rage quit and go play something else.

In between puzzles, you and your trusty slingshot will do battle with all manor of beasts and mythical creatures. These have the effect of boss fights, since you have to destroy each boss or group before being allowed to continue on your way. Combat in Língua is one aspect I’m not a huge fan of. The movement and attack controls are a little wonky to begin with, but add in the frustrating movement delay when using the slingshot and fights get annoying really fast.

Overall, Língua is a lot of fun, and well worth the roughly $5 it costs on Steam. I can’t help but wonder if it’d actually be better without the combat, and just focused on the puzzles, but I also see the point in trying to mix up the challenges.