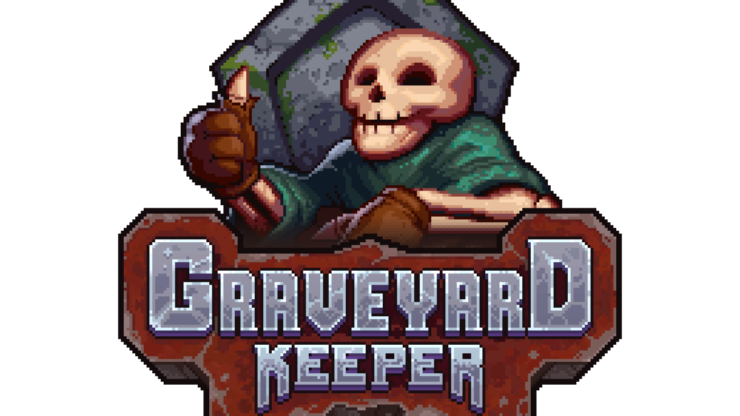 Reviewing a game that’s been out a few years is a little weird, but it still fits the criteria of games we look at here: indie and/or cheap. Created by Lazy Bear Games, Graveyard Keeper was actually released in 2018 and has become one of the more popular indie games on Steam. Considering the similarities with indie smash hit Stardew Valley, it’s really not that surprising. In fact, most of this review could be summed up as “Stardew Valley with more cannibalism and corruption.”

Concept behind Graveyard Keeper is you, modern day person, end up worm food, but instead of meeting St. Peter you find yourself in the middle ages. By some weird twist, everyone thinks you’re the new keeper of the local graveyard and expects you to act accordingly. Your guide in this mess is a talking alcoholic skull. Early on, you discover that it might be possible to go back to modern times by using a magic portal, but it’s gonna take some time and work to make that happen. So you have to actually keep the graveyard. Think Connecticut Yankee in King Arthur’s Cemetery.

Gameplay is open-world and quest-based. There are a few dozen NPCs that have missions that typical revolve around fetching something for them, and in return they give you something you need or unlock a technology. Speaking of technology, the game comes with a pretty lengthy tech tree covering different areas from theology to construction. You gain tech points by creating or gathering various items. I generally like this because it doesn’t feel like a grind to just get new techs, but instead just a somewhat natural progression. Along with your quests, it’s up to you to do graveyard keeper things like burying the dead. Everyday or so, your communist talking donkey friend will bring you a corpse for burying. Once the dead is buried, it’s your responsibility to decorate their grave using items you’ve built from materials like wood and stone.

If all of this sounds very grindy, you’re right. Similar to Stardew Valley, the ingredient gathering is what you spend most of your time doing. The limitation on how much you can do is set by your stamina, which is burned by each action you do. You can make food to eat, which will replenish your stamina, but this also has a limit before you’ve got to sleep.

There isn’t anything exceptionally hard about Graveyard Keeper. Get the stuff, build the things, and then progress. That’s really it. There’s a rudimentary combat system for fighting monsters and critters, a fishing mini-game that will seem really familiar, a TON of things to build, but nothing here that will stymie you for too long. It’s a typical chill out game.

Overall, I really love this game. Over the past week or so, I have just a shade over 20 hours played if that tells you anything. Because it’s an older game, there’s now 3 DLC expansions available that I haven’t played, but one of them is called “Better Save Soul” so I’m pretty well sold on buying it.