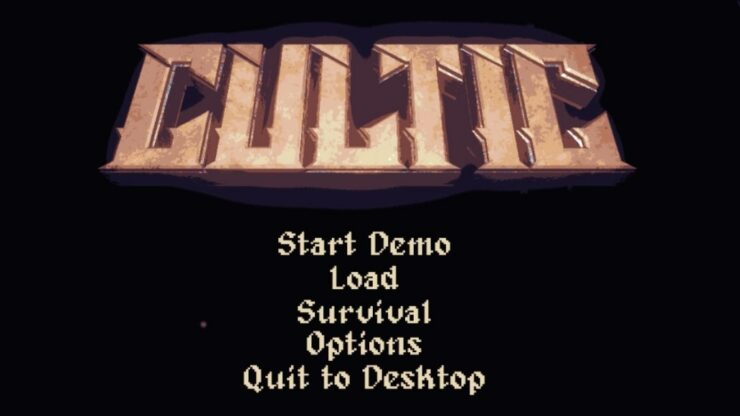 I’m always a big fan of indie games with sweet demos. Cultic will be the first of many demo review previews that I intend to do, and brother is it a bloody doozy. If you like blood red pixels on your screen, you are in luck.

Cultic puts off very strong Wolfenstein, Doom, and Duke Nukem vibes, which I’m sure the developer Jason Smith very much intended. From the weapons, to the gore, to even the jail cells right out of the gate in the demo it all feel very familiar. Thankfully, the demo at least didn’t include any of those awful fucking dogs from Wolfenstein.

The story (as I could put together from the demo) is there’s been a string of disappearances in a small city for years, it’s all the work of some psycho ass ghoulish cultists. They’re not incredibly smart, and at times felt like Walkers from The Walking Dead getting stuck behind objects, but if you forget to check the doors and corners they’ll still get you. Demo comes 5 (at least from my count?) different types baddies to obliterate, including at least one asshole with a chainsaw. You get access to a bunch of different weapons in the demo, including throwable fire weapons which are a lot of fun. Ammo seems scarce early on, so I really liked hacking with my hatchet.

The movement options are pretty sweet too. I really like the sliding mechanic and the ability to crouch, even if it did elude me at first. One of the problems those old games had, and some of the newer games that tend to emulate them, is the player moves so fast that it can be hard to control. Cultic doesn’t have that problem, which I definitely appreciate.

The game is still in development, but everything looks really promising so far. I’m pretty excited to play the full thing.

You can wishlist and play the demo here at Steam. Go check it out! Definitely worth your time.

Beacon Pines- Come for the art, stay for the story