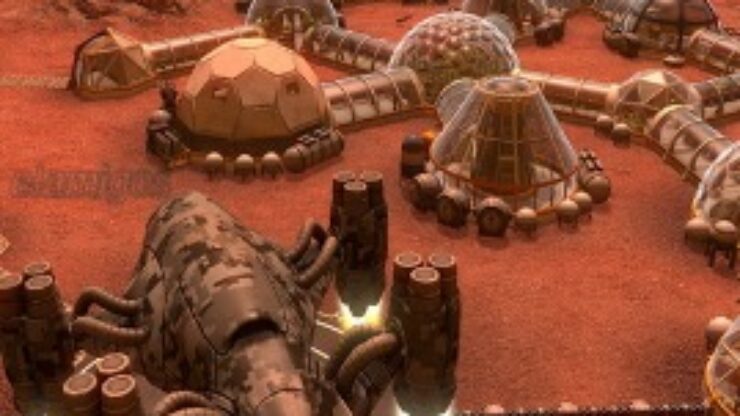 Anytime I see or play a planet colonization game that involves domes, I always think of that scene in Total Recall. The idea of colonizing a planet that requires an artificial atmosphere to keep you for suffocating or exploding just seems like a really poor life choice to make. However, humanity has always been full of brave idiots willing to do dangerous things, so I’m sure someday we’ll have these little domes on another planet. In the meantime, we can simulate what they’ll endure with Planetbase!

Developed by Madruga Works and released back in 2015, Planetbase allows you to plan and manage the colonization of another world. Like most builder games, you start with a handful of colonists, some supplies, and a blank canvas of land to build upon. Everything you build is effectively done via creating pods of some sort. Pods for creating resources like power, water, or air and pods to house colonists and their workshops. The pods come in different sizes, which strangely creates its own challenge in creating a good base layout, and are all connected by either a sort of pipe or a corridor. All the resources are moved around the pods via neat looking color-coded creates.

Your colonists show up with predetermined jobs because the future apparently involves some sort of professional caste system, so don’t expect your workers to actually help with the farming or your biologists to help move anything. You have some level of control of the mix of colonist types that show, but it isn’t exact, and if you run out of colonists of a particular skill you’re pretty well doomed. Not even your bots, which can do a decent amount of the real work, will save you.

Colonists are going to die. There’s no way around it. Even more than most builder games, Planetbase is a delicate balancing act, especially on the more difficult planets. You have to use your precious energy, food, and water resources to keep your colonists alive. If one slips, the entire colony can collapse and you’ll get to watch all of your intrepid colonists die very slowly in front of your eyes. And that’s not even accounting for disasters that can knock that out of balance even if you do everything right! Disasters, such as meteors and sandstorms, are always looming.

The difficulty of maintaining that balance can be a turnoff to some. It’s incredibly unforgiving! One misstep and the entire colony can perish. But after getting over the initial difficulty curve, you develop a methodical building pattern that keeps everything in check. Once that happens the game tends to get a little stale. For me, the first 2 hours were really exciting. After that, everything felt really repetitive and the goal of just “get big” wasn’t all that appealing. Admittedly, this is totally a matter of taste- for some managing that resource balance with a massive colony makes them feel like the master puppet master. The MPM, if you will.

Overall, Planetbase is a lot of fun. I could have used more of an endgame, but that could just be where I like seeing these games go. If nothing else, it’s convinced me what a terrible idea trying to colonize Mars and the Moon really are.